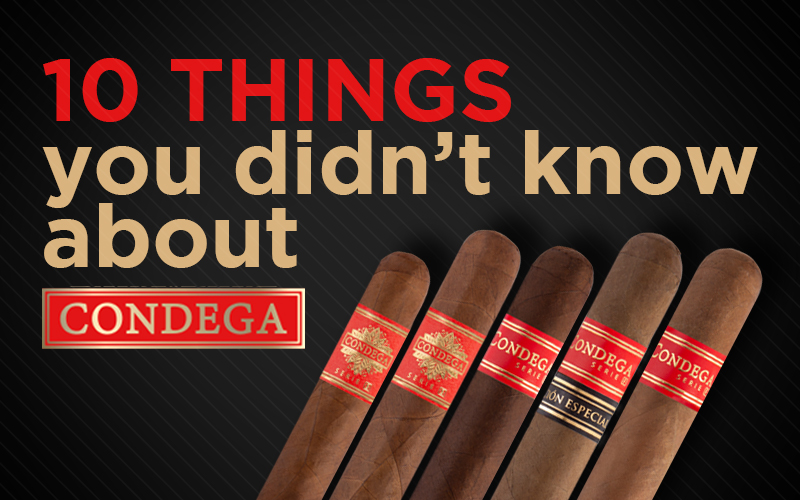 With almost fifteen years of tobacco history, the Nicaraguan premium cigar brand Condega Cigars has already become one of the must-have brands in the best national and international humidors. Its consolidation in the premium tobacco market is irrefutable, as evidenced by both sales and the countless messages of support from its fans on social networks.

The community of aficionados and countries that surrender at its feet keeps growing inexorably, so, whether you are already or still thinking of joining the condegaliebers, this is a good time to test what you know (or what may surprise you) about Condega Cigars:

01. CONDEGA CIGARS IS A GLOBAL BRAND WITH A SUCCESSFUL HISTORY

Both the «Condega» trademark and the ring design accompanying the Serie F were registered in 2003. However, it would take three years for the brand to start selling in Spain and fourteen to begin its international adventure.

The name chosen for the brand is an obvious tribute to one of Nicaragua’s most important tobacco regions, the Condega Valley. Tobacco from this region, but also from Jalapa and Estelí, are used in the production of Condega Cigars, taking advantage of the full potential of the flavor, complexity and aroma that converge in the tobacco leaves that grow around these three best tobacco growing areas of Nicaragua.

The red and gold colours used in Condega’s ring refer to the power and elegance of a blend that want to satisfy the most demanding aficionados.

Traditionally, Spain has been a country heavily dominated by the Cuban Cigars market, but nowadays things are changing and Nicaraguan Cigars have broken the mould and keep scaling the Spanish favorite rankings. Condega Cigars is leading this challenge and has the honor of being the best selling premium Nicaraguan brand in Spain since 2017. It is also the seventh best selling premium cigar brand in Spain, regardless of its origin. In addition, Condega is backed by unprecedented sales success at the international markets, no doubt thanks to the love with which aficionados have received the brand, which they have adopted as one of their favorites.

Renowned Cuban-born master blender Arsenio Ramos, who passed away in September 2018 when he was 83, was the brilliant mind that created the Condega Cigars blend in 2003 for Casa Fernandez (aka Aganorsa Leaf), established in Nicaragua in 1997 and owned by fellow Cuban Eduardo Fernandez. As the fourth generation of a tobacco family, Arsenio dedicated his life to tobacco and was head of processing for Cubatabaco (the state tobacco company in Cuba) specializing in the critical step of tobacco fermentation. After his retirement when he was 65, Arsenio moved to Nicaragua to work for 18 years with Eduardo Fernández, creating different blends.

04. CONDEGA CIGARS IS AVAILABLE IN 24 COUNTRIES

05. ARSENIO EDICIÓN ESPECIAL HAS A DIFFERENT BLEND FROM THE SERIE F LINE

Originally, Serie F Arsenio was born as a limited edition to pay tribute to the brand’s master blender, Arsenio Ramos, using a special blend he had created for his daily smoking, which is different from the rest of the Serie F. Its success among aficionados led to turn it, since 2019, into a special edition (Edición Especial) of regular production that still follows the parameters of quality and consistency that is brand’s signature.

06. THE SERIE S WAS DESIGNED FOR TRAVELLING WITH CIGARS

The natural evolution of Condega gave rise to the Serie S, its most premium line, whose Magnum 52, Robusto and Short Robusto cigars come in tubes for major confort of the aficionado during his daily movements or travel. The same concept was applied to the launch of the Serie S Half Corona cigar, which is presented in practical five-unit tins specially designed for more comfortable transportation and protection of the Condega cigars wherever you go.

07. AGANORSA IS THE SECOND LARGEST TOBACCO PRODUCER IN NICARAGUA

Condega Cigars are made using Aganorsa’s tobacco leaves, grown in its farms in Condega, Jalapa and Estelí. Currently, Aganorsa Leaf is the second largest tobacco producer in Nicaragua, whose work is known and recognized worldwide by amateurs and professionals in the industry. Its owner, Eduardo Fernández, applies the traditional Cuban production method to all the products that come out of his factory. He has also registered the name Aganorsa as a specific kind of the Corojo 99 variety, and characterized by its special sweetness.

The Maduro wrapper grown in the San Andres Valley in Mexico is considered the best Maduro wrapper in the world, and it is used to make the Serie F Maduro cigars of Condega Cigars. The San Andres Valley, southeast of the port city of Veracruz, and located between volcanoes and the Catemaco lagoon, is the heart of Mexican cigar growing. Its soil is extraordinarily rich and imbued with the characteristic flavor of cigars made from tobacco leaves from the valley.

09. MINI TITAN IS THE MOST POPULAR VITOLA OF CONDEGA CIGARS

Of the ten cigar sizes that Condega Cigars offers for its Serie F cigars, the Mini Titan is the best-selling one. With a size of 4 ½ x 60 and about 18 grams of pure Nicaraguan tobacco, experts have described it as «a great little cigar».

The head of the Serie F Mini Titan has a pigtail cap. It is an easy cigar to smoke, that keeps burning with a generous draw and adapted to the current trends, but in which you want to taste a well rolled cigar.

10. LANCERO WAS THE MOST SUCCESSFULL VITOLA FROM THE NOVELTIES LAUNCHED IN INTERTABAC 2019

In 2019, Condega Cigars launched two new cigar vitolas for its Serie F, Mareva (5×42) and Lancero (7×40), which became the most successful vitola among Condega Cigars aficionados. Its introduction at Intertabac 2019 was the big surprise of the trade tobacco fair. With the appearance of both cigars, the Nicaraguan tobacco brand defended its return to the classic refined sizes. Lancero is a premium cigar primarily designed for expert smokers, and the Serie F Lancero has earned a reputation and won the aficionados respect due, mostly, to its magnificent construction that allows the cigar to be enjoyed from start to finish.