Filler and binder are 100% from Estelí, Nicaragua, and the honey-coloured layer is from Aganorsa (Agrícola Ganadera Norteña, S.A.), based in Managua, a company that produces tobacco from Criollo and Corojo seeds.

I have chosen and enjoyed one of them, the Robusto format, 5 inches (12.7 cm long) and 52 diameters. Very compact to the touch, it definitely has a good amount of tobacco, well linked, with a red oily layer, without veins and dressed in a beautiful ring in gold and red with the brand identification Condega Serie S.

Cold releases earthy and fresh grass scents. It looks very good, it forms an abundant white smoke, which I like in cigars and the draw is magnificent. The ash is greyish whitish. During the smoke, I dropped the ash only twice, because it remains and does not fall, that gives an idea of the excellent blend and construction.

The first third of the smoke is tricky, appears a moderate strength and herbaceous, earthy freshness, tasting smoother than it really is.

The second third is sifting the herbaceous scent and white flowers and nuts jump in with some woody and honeyed touches.

In the last third is when spicy, ginger and even menthol touches emerge. It is like the Momotombo volcano, it explodes in flavours and constant changes along the smoke.

Just as you do not have to trust volcanoes, apparently calm, the same thing happens with this great cigar, which is gaining in complexity and strength as the smoke continues.

The Nicaraguan writer Rubén Darío has a poem in his book, El Canto Errante, with memories about Momotombo, from which I extract a beautiful verse: 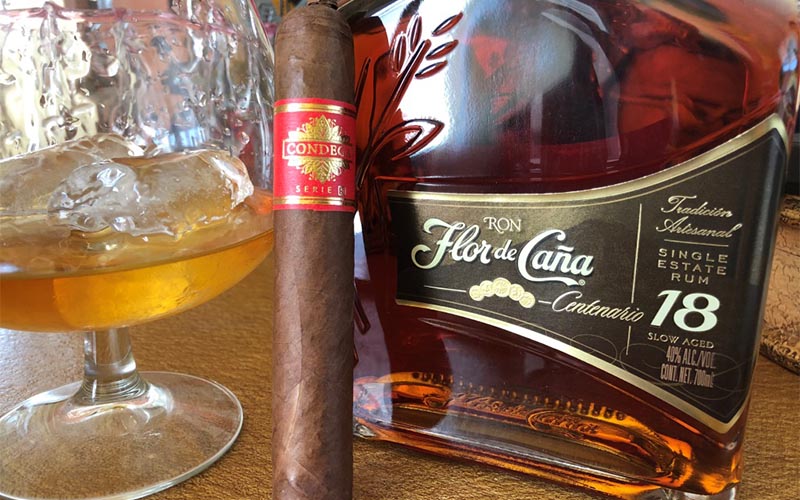 I have paired it with a distillate from the same country, an 18-year-old Flor de Caña rum, also from Nicaragua, with amber colour and touches of caramel, cocoa, spices and toasted oak.

That sweetness of the rum seems to fade the herbaceous and earthy touches of the cigar, but finally combines and accompanies the spicy touches. The evolution of this Condega Momotombo plays well with rum and combines the perfumes of which the poet speaks.

This Robusto is easy to smoke. I think, with a well-defined transition between thirds, it will satisfy both the amateur who comes looking for a good cigar and the expert, who will get a wide range of different nuances and perfect combustion and shot. A tasty experience and flavour explosion of about 45 minutes.